Chiles en nogada or stuffed poblano peppers in walnut sauce, are a festive dish for Mexican Independence Day. They’re crazy delicious and unlike any other Mexican food you’ve ever eaten. Cook my vegetarian recipe, it’s definitely a must-try food!

September is a month of celebration for Mexico, it’s when we celebrate our most important holiday: our day of independence. Which is celebrated on the 16th of September.

Today I want to share with you a recipe for a dish that embodies the rich and complex history and culture of Mexico. A dish which is a symbol of Mexican independence, chiles en nogada or stuffed poblano peppers in walnut sauce.

It’s believed that this dish was created in Puebla in 1821 by a group of nuns. It was created to honour a visitor by the name of Agustin de Iturbide. He signed the Treaty of Córdoba to gain Mexico’s independence from Spain. Señor Iturbide also went on to briefly become Emperor of Mexico.

It’s said that the nuns wanted to create a dish that included the freshest local seasonal ingredients, as well as incorporate the three colours of the Mexican flag. The green symbolising independence, white symbolising religion, and red symbolising union.

The elaborate meal had to of course include a very important ingredient to the region: Poblano peppers. Puebla is the birth place of Poblano chiles.

Puebla is also the birthplace of a Mexican stuffed pepper dish called chiles rellenos. Chiles rellenos are fire roasted poblano peppers. They are typically stuffed either cheese or meat, then dipped in beaten eggs and deep fried.

What Are Chiles en Nogada

Chiles en nogada are fire roasted poblano peppers stuffed with a mixture of minced pork, fruits, raisins, aromatic spices and either almonds or pine nuts. The dish is covered with a creamy walnut sauce then sprinkled with pomegranate seeds and chopped parsley.

This is a very Baroque-era dish typical of the cuisine of Mexico’s melting pot of cultures during those times.

There are countless variations to the this peppers in walnut sauce.

There are many historians that say that the first time this elaborate meal was made, the recipe was never written down but instead passed down from one generation to another simply by word of mouth.

This would explain all of the disagreements on what the actual dish that was served on that special visit included or didn’t. Another thing to take into account is that since chiles en nogada has been part of our history for over 200 years.

Every cook is going to add a special touch. Not to mention also incorporate what is locally and seasonally available to them.

I think what matters most is that we all make an effort to stick with the tradition of preparing this meal and to pay homage to those that fought for and won our independence  — so if your recipe isn’t exactly like the neighbours, it’s okay.

What Ingredients Are Used in Chiles en Nogada

How to Make The Creamy Walnut Sauce or Nogada

The nogada is made using peeled walnuts, cheese, a liquid and a couple of seasonings. Typically everything is blended until perfectly smooth.

There are some variations as to which cheese to use. The most traditional recipes use goat cheese, but modern adaptations use other cheeses too.

The sauce can be made using goat cheese or queso fresco. Another very modern twist is to use cream cheese.

I personally think the goat cheese is the best to use. I enjoy how well it pairs with the rest of the ingredients.

To help blend the cheese a liquid is added. It can be to use milk, or double cream or even sour cream.

What Spices are Used for Poblano Peppers in Walnut Sauce

The spices used appear to be quite common in most recipes. They tend to be aromatic spices such as ground cinnamon, ground cloves, salt and ground black pepper.

Some herbs may also be included. Ones like Mexican oregano and thyme.

Having experience with cooking countless dishes from North African, Middle Eastern, and Indian Subcontinent cuisines, I didn’t find the combination of meats with fruits and aromatic spices odd.

But as far as Mexican gastronomy this is a combination that I’ve only ever seen in the filling (or picadillo) for the chiles en nogada stuffing.

This touch is of course brought to the dish from the colonial cooking techniques and ingredients that were introduced by the Spanish. I do know that the sweet-savoury combination can seem strange. But once you’ve tasted it, you’ll see how when done correctly, it really is a very complimentary combination.

Should Chiles en Nogada be Battered and Deep Fried

Some say that the stuffed pepper should be dipped in beaten eggs and fried. This is called capeado in Mexico.

Others that say that is not the case. I tend to lean on the no need to batter and fry. Simply because preparing this dish is time consuming enough one needn’t add yet another step.

What Toppings Are Used for Chiles En Nogada

At least the toppings are not something people disagree on.

First is the creamy walnut sauce, which gives us the white color for the flag. Then the pomegranate seeds for the red. Lastly finely chopped parsley for the green.

You can simply coat the stuffed pepper with the nogada sauce then sprinkle with pomegranate seeds and parsley. Or to have a little creative fun decorate it in areas to mimic the Mexican flag. (see the pictures for an example)

I love chiles en nogada so much, it’s one of my favorite all time dishes. Well that’s to say when it’s prepared nicely. After going meatless I really didn’t want to stop eating this dish so I created a vegetarian version. I did my best to stay as true as possible to this very special and traditional dish.

In the years I’ve made it, I’ve been able to fool meat eaters. They didn’t notice it wasn’t filled with minced pork. They complimented me on that but also on the perfect balance of flavors that my dish had. So I think you too will enjoy it.

For the “meat” stuffing I used rehydrated TVP, or textured vegetable protein. You can purchase it at any grocery store or health food store and of course on Amazon.

When you work with TVP the challenge can be allowing enough time for the spices and flavours to really seep into it. You can’t skip this step! This is what allows all of the flavors to come together instead of having the TVP overpower the other flavors.

I cooked the filling the night before, the next day the flavour was fantastic. TVP is amazing! It’s a fantastic meat substitute — specially for finely minced meat.

Other substitutes for the meat can include lentils, mushrooms, and even quinoa. All of which are delicious. But to truly get the most authentic or traditional feel to the dish you really should use TVP.

The traditional recipe calls for peeled fresh walnuts, but they’re more difficult to find. I don’t recommend trying to peel them yourself. This dish is difficult enough without meticulously trying to peel walnuts — it will make you crazy!

Instead just use regular shelled walnuts.

The reason the traditional recipe calls for peeled walnuts is because they are harvested in these months. When they’re still young the skin is thin and easily comes off.

There are people that say that the skin will yield a slight bitterness, but I didn’t detect that and perhaps it was because of the addition of sweetness that balanced it out. The one thing I did notice by leaving the skin was that my sauce had a slight tone. Ones made with peeled walnuts have a purely white color. But it doesn’t really matter because the flavor was still delicious.

If you want to make this dish 100% vegan I would suggest swapping out the goat cheese for almonds.

I suggest making a batch of my vegan Mexican crema recipe but omitting the lime juice. This will make the cream more neutral and be better paired with the rest of the nogada ingredients.

So you’d blend the Mexican crema with the walnuts, salt, sugar and black pepper. You will also need to add just a little bit of unflavored almond milk to the blender. Doing so until you have a smooth but gravy-like consistency.

I think that you will really love these unique flavor of chile en nogada. It’s savoury, sweet, smokey from the roasted poblanos, it’s creamy and velvety and just delicious!

Chiles en nogada is attainable Mexican haute cuisine that represents the flavours and techniques of Mexico’s Pre-Hispanic and European cuisines.

It is a marriage of all these different ingredients that perhaps at first may seem like they will not come together nicely, but in the end transform into a unique and delectable burst of  awesomeness.

Chiles en nogada is not a dish you will want to cook or eat too often. It’s something that is special and a perfect treat for once or twice a year. I’ve been told that my vegetarian version are much better than some you get at restaurants.

In each bite my taste buds were met with the smooth creaminess of the walnut sauce, which you could taste the walnuts and the hints of goat cheese. And though the sauce had a touch of sugar added it wasn’t sweet, it was savoury and perfect.

The tender Poblano had those delectable tones that can only be achieved by roasting it on an open flame. Then came the scents of sweet fruits, cinnamon and aromatic cloves. You could taste the fruits which somehow weren’t overly sweet, they were tender and held their form.

Now and then were little tender crunches of almonds followed by touches of sweet raisins. Then would come a pop of pomegranate sweet-tartness and followed by the fresh herb-iness of parsley.

This is a magical combination of flavours and textures that will leaving you wanting seconds.

As we say in Mexico, buen provecho! and also Viva Mexico!

Hope my fellow Mexicanos have a fantastic celebration. The rest of you I hope you join us for some good food and fun celebrations. 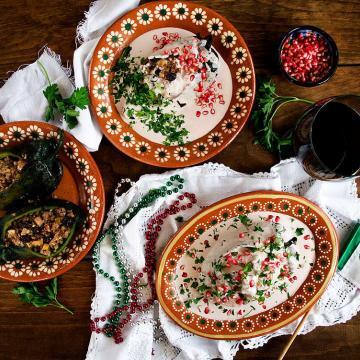 Ingredients For The Filling

Ingredients for Nogada or Walnut Sauce

Instructions for Roasting The Poblano Peppers

How to Rehydrate TVP

Notes 1. Here’s my tutorial on how to seed a pomegranate http://mexicanmademeatless.com/the-easiest-way-to-cut-open-a-pomegranate/ 2. Some people like to leave the peel on the fruits, but I like to remove it because it makes the dish’s texture better. It is up to you. 3. I’m not a huge fan of raisins so I don’t add too many. Adjust to your taste. 4. To give the dish even more flavour, I would recommend cooking the filling mixture the day before and allowing to sit in the fridge overnight. The next day simply warm it up before stuffing the peppers.
Keyword chiles en nogada, mexican independence day, poblano peppers, walnut sauce
Tried this recipe?Mention @MexicanMadeMeatless or tag #mexicamademeatless!