Learn how to make traditional Mexican hot chocolate using chocolate tablets or disks. This recipe is vegan and has a spiked option!

The weather has changed and autumn has arrived.

So far my first seasonal cravings have been for warm, soft, airy pan de muerto and a frothy cup of chocolate caliente.

Autumnal heaven in my book!

I just love how the sweet bread feels in my hand and fingers. The way the airyness causes it to squish a bit when I ripped off a piece.

Then holding the cup of hot chocolate in one hand while I carefully dipped my piece of bread into it to let it soak up that chocolatey goodness. Sigh.

I’m not one to let cravings go unsatisfied — life is to short for that!

This hot chocolate version is made using the chocolate discs.

You can find them at your local Hispanic food store. Or in the ethnic food aisle at the grocery store. But of course there’s always trusty Amazon.

There are several brands of chocolate disc. But it comes down to your personal preference and budget.

Some are vegan and non-gmo certified, and others though they don’t contain dairy in their ingredients list, are not certified vegan.

So that’s a personal call for you to make.

The three most popular chocolate disc brands are Abuelita, Ibarra and Taza.

Abuelita is the more economical option of the three. Though it doesn’t include dairy in it’s ingredients, it is made in a factory that processes dairy, eggs and wheat.

The company doesn’t claim the “vegan” label, but on Peta Latino they do list Abuelita chocolate as vegan.

The sugar content in Abuelita is high so you really don’t need to add any more sugar.

Abuelita has only one classic version of the discs. Occasionally I’ve seen the chocolate in granulated form so it’s ready to mix, heat and enjoy.

Abuelita is owned by Nestlé, which is a Swiss company.

Ibarra Chocolate is an actual Mexican owned company out of Guadalajara, Jalisco. It has been around since 1925.

Ibarra doesn’t state whether or not they are vegan, but their ingredients appear to be vegan. The question comes in how the sugar they use is processed — is it vegan or not.

I’ve seen the classic Ibarra tablets package as well as individual packages and even a reduce sugar version. Though it’s only been on a couple of occasions so it may be difficult to find.

Ibarra also has the ground packages for a quicker preparation. They recently launched a premium or semi-dark version.

My family is from Jalisco and Ibarra is quite popular there, for obvious reasons. But we grew up drinking both Ibarra and Abuelita. I buy both brands.

But sometimes I lean towards the Abuelita simply because they occasionally include gorgeous free mugs with the box of chocolate. (I’m a sucker, what can I say).

I’m not too familiar with this brand. I’ve never actually tasted it. So if you have any feedback do share in the comments below.

In the Hispanic community it’s a big debate which brand is the best one.

It’s the never ending, epic battle of Ibarra vs. Abuelita!

I suggest you try both and decide for yourself — or even better if you can splurge on a more expensive brand then do so. Look for an artisan made one or just less unpronounceable ingredients.

Basically all you do is simmer either water or milk (or both). Then you add a stick of Mexican cinnamon and the chocolate disk.

Please note that some people will simmer water with cinnamon first before adding the chocolate and milk. This yields a stronger cinnamon flavor. It’s all a matter of personal taste.

The ingredients are simmered and stir to help dissolve the chocolate tablet. Then the liquid is frothed up with a molinillo. This is to give it that frothy layer that must be present in Mexican hot chocolate.

If you don’t own a molinillo you can use a regular whisk.

But wait, this hot chocolate has a special extra something. Read on to find out what it is.

As you can see I used almond milk for my chocolate. But you can also use soy or cashew milk would work well.

I was happily surprised at how well the almond milk frothed up.

This is totally optional, but I highly recommend you try it out sometime.

Simply add a shot of Kahlua to your chocolate caliente!

Kahlua is also from Mexico. Plus Kahlua is vegan too! Did you know that?

The coffee liqueur compliments the chocolate and cinnamon tones perfectly. It is very sweet though and specially if you’re drinking with a pan dulce, I don’t recommend you have all this sugar too often. 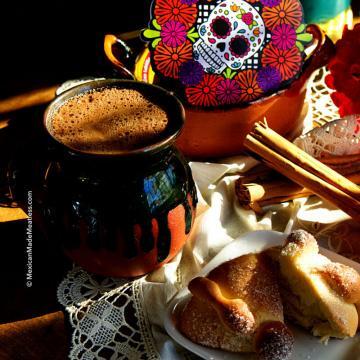 Nancy Lopez-McHugh & MexicanMadeMeatless.com
Learn how to make dairy free Mexican hot chocolate to enjoy with your pan dulce. This recipe is authentic and so full of delicious flavor. You can even spike it for an extra treat!
No ratings yet
Save Recipe Saved!
Print Recipe
Prep Time 2 mins
Cook Time 22 mins
Course desserts, Drinks
Cuisine Mexican, vegan, vegan mexican
Servings 4 servings
Calories

*In the photos I’ve used Silk almond milk  * In the video I used cashew milk. Either work great, but the almond froths up better than the cashew. ** If you don’t have a molinillo you can use a whisk instead.

As I previously mentioned my craving was for a hot chocolate and a pan dulce to dip into. That’s exactly what I enjoyed.

If you pair your chocolate caliente with a pan de muerto then you have a perfect treat for celebrating Day of The Dead.

Now wouldn’t you love to be doing this right now? Si!! Go on and make yourself a pot of Mexican hot chocolate! 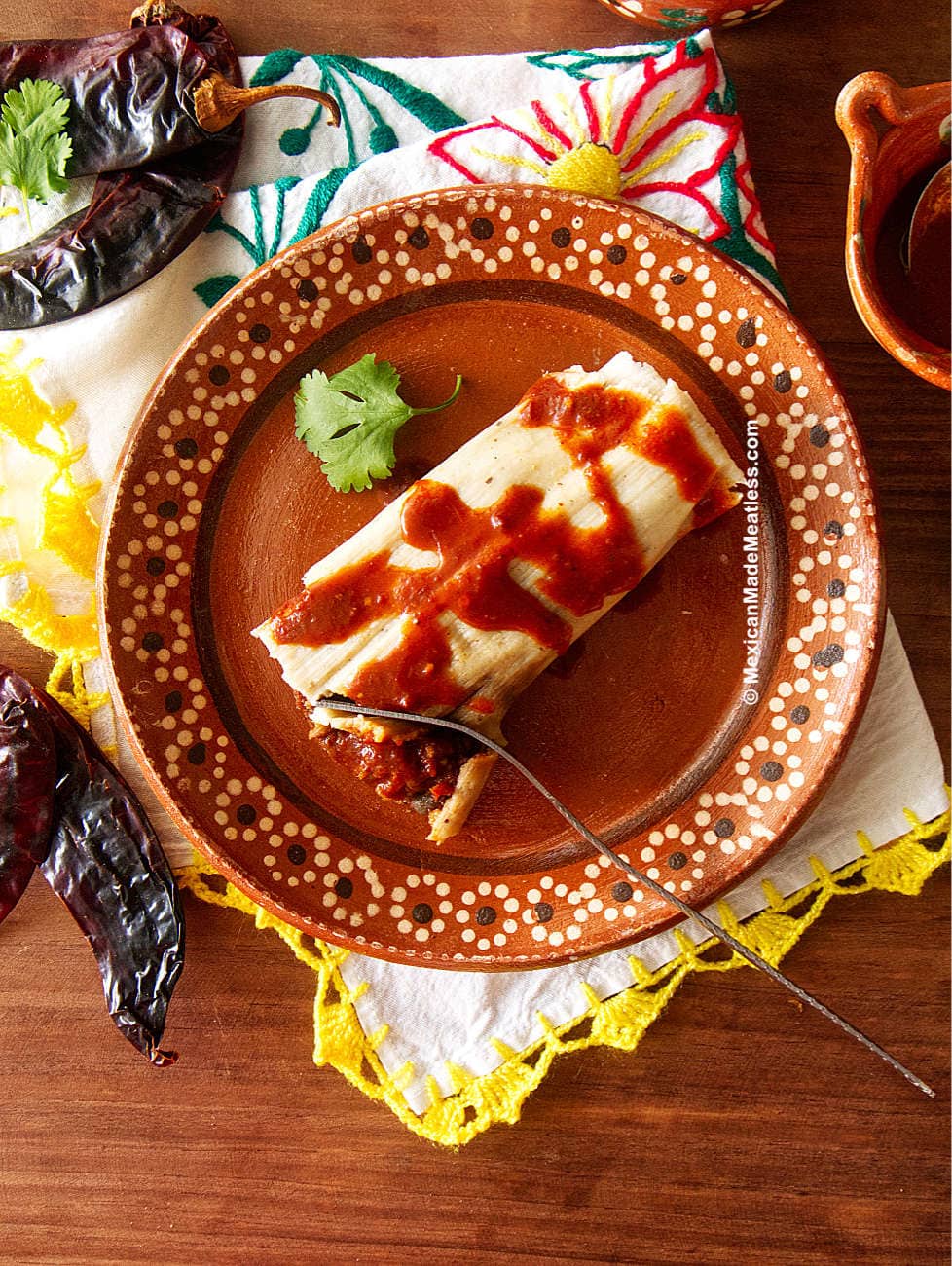 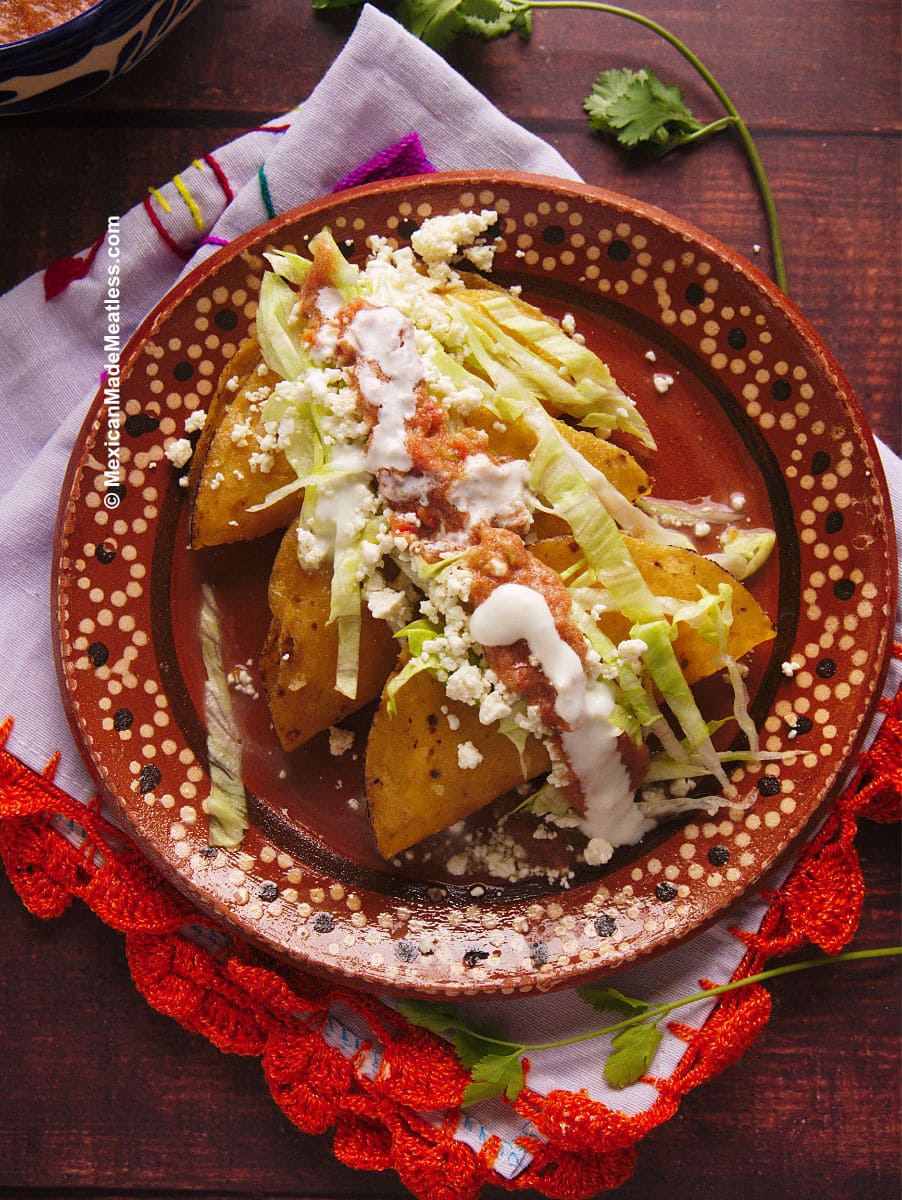 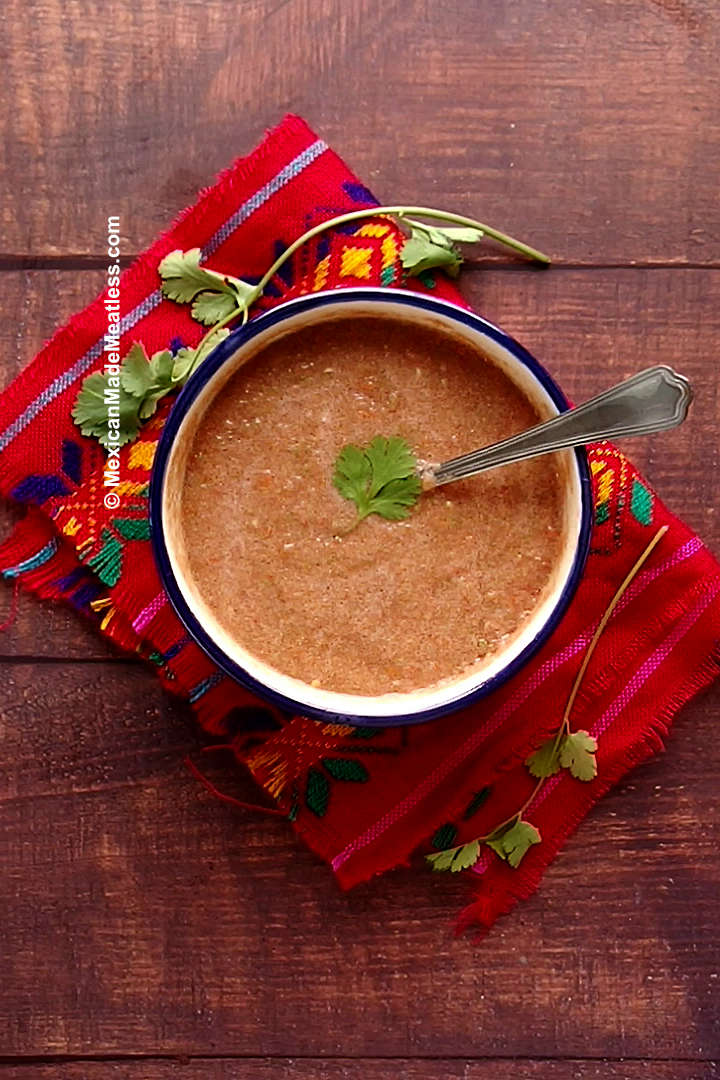