Learn how to make this incredibly easy masa for tamales or tamales dough recipe. This masa can be used with all sorts of savory fillings for your favorite tamales. You only need 5 ingredients which are easily found anywhere you live. In this recipe you can use either masa harina or fresh masa from the tortilleria. The recipe is authentically Mexican and vegan!

Tamales are a huge part of our Mexican culture.

We make them for the holidays, special occasion or simply when the cravings for these delicious small steamed corn dough pockets strikes.

If you’ve never made tamales from scratch, don’t worry. I know at first they can sound intimidating but in fact aren’t really that difficult to prepare. You only need to learn the foundations and making tamales will become second nature to you.

The most important tamales foundation is the masa. You need to have a flavorful, light, airy and creamy masa to make delicious tamales — both savory and sweet!

This recipe is a basic masa or dough recipe with easy to find ingredients. Below I also share the method for making the tamales masa using fresh masa you can purchase at a tortilleria. The recipe is vegan and it’s incredibly easy to make and the texture and taste are absolutely perfect!

If you want to learn how to make tamales masa with oil and basic sweet masa for your sweet tamales, then make sure you check out my tamales ebook. It has loads of additional tips and tons of savory and sweet tamales recipes.

What Kind of Masa to Buy for Tamales

The majority of you won’t have access to fresh masa from a tortilleria, so the second best, or most convenient, thing is to use dried masa harina. Which you can get at nearly any grocery store, or of course there’s always Amazon too.

The most common masa harina brand is Maseca. Though it can be controversial amongst many, it is the one most readily found. My friend Rocio Carvajal has recommended another brand you can get on Amazon.

Is Tortilla Masa The Same as Tamales Masa

When I make tamales using masa harina I always use masa harina specifically labelled for tamales.

The texture between this and the regular masa harina is a bit different. I personally feel that the “tamal” specific one gives a better texture for tamales — however, I previously on several occasion used regular masa harina and still have had good results.

Get whatever is easiest and more budget friendly for you. Make your tamales with lots of amor and they’ll be amazing!

The ingredients used in making tamales dough are quite simple and not too many.

You can use fresh masa from the tortilleria, or grind up your own corn to make the masa. Make sure you’re getting just masa and not “masa preparada” or prepared masa. This dough is ready to use and usually has pork lard and animal broth — and needless to say we don’t want that!

If you can get the fresh masa then reach for the bag of masa harina.

Baking powder is a leavener, of course, and it’s used to help make the masa less dense. In olden days they didn’t use it, instead the masa was just whipped enough to add that airiness. But it really is a great addition and I suggest you don’t skip it. It helps make the dough airy, light and fluffy and therefore a better smoother texture in the tamales.

Salt is seasoning used to help bring out the flavors of other ingredients. Don’t skip the salt, it makes the masa taste much better.

The traditional fat used is pork lard, and of course we don’t want to use that!

To mimic the most traditional recipes and textures I use vegetable shortening. I know it’s not the healthiest thing in the world, but it’s what I most commonly use for tamales.

If you don’t want to use shortening, you can use solidified coconut oil — but keep in mind that it may add a bit of flavor to the masa. Another option is to use vegetable oil, which is my second preferred option after the shortening. Some people also like to use olive oil, I have personally never done this because the olive oil that I buy has a strong taste. But you can experiment with whatever you like.

Always, always use vegetable broth to hydrate your savory masa for tamales!

Water will make your masa taste bland. So use either homemade vegetable broth, the cartons of vegetable broth or vegan bouillon powder flavored in vegetable, chicken or beef.

When making sweet tamales you can use either milk or fruit juices to hydrate the masa.

For the milks it can be dairy for a vegetarian option. For the fruit juices it will depend highly on what the flavor of your tamales is.

I have used coconut milk, almond or soy milk and pineapple or apple use for my sweet tamales. You can see those recipe samples in my tamales ebook.

Is This Recipe Vegan

Instead of chicken or beef broth, we’re using vegetable broth.

If you want lots of vegan savory tamales filling recipes then make sure you get a copy of my Mexican Tamales Made Meatless cookbook.

How to Make Tamales Masa

Making tamales masa or dough for tamales is incredibly easy!

Make sure all of your ingredients are at room temperature so they combine better.

The first step is to whip the shortening until it’s softened and has a light an airy texture. You can do this either in a stand mixer bowl or with a handheld mixer in a large bowl.

Next you’re going to add half of the masa harina into the whipped shortening. Then also sprinkle in the baking soda and the salt. Carefully on low speed begin to mix the ingredients until well combined. The results will be coarse breadcrumb texture.

Use a spatula to wipe down the sides and bottom of the bowl in order to help incorporated the ingredients as best as possible.

Next you’re going to add the remaining masa harina to the mixed bowl then pour in about 1 cup of the broth. Again use the spatula to scrape down the sides. Then slowly begin to mix the ingredients.

Little by little begin adding more and more of the broth until you have a well hydrated masa that is light, airy and well combined.

Scrape down the sides of the bowl then give it another mix.

Once you have mixed all of the ingredients and you feel your masa is ready, you can do the “float test”.

Fill a small glass or bowl with water. Then grab a small amount of the mixed masa and drop it into the glass and it should float back to the top straightaway.

If the masa doesn’t float then it needs to be mixed more to have more air whipped into it. You can test again after more mixing.

So not everyone does this masa float test. You don’t have to do it, but I like to. This way I feel the ingredients are well combined, the masa is well hydrated and that the tamales won’t come out super dense.

If you have access to fresh masa from the tortilleria then you use it instead of masa harina.

The process is the same except you’ll need to use much less broth or liquid to hydrate the masa.

Additionally you’ll need to break up and constantly slowly add chunks of the masa as you mix. It won’t be all in one go like the masa harina.

Also if you ever have the chance to make tamales with fresh masa, do so. The taste is quite a bit better than masa harina.

As previously mentioned there is no lard in my recipe. The recipe is 100% vegan!

Masa for Tamales with Oil

If you would like to use oil instead of shortening for your masa for tamales, it’s no problem at all.

Use vegetable oil and use 3/4 cups to 1 cup instead of the 1 cup of shortening used in my recipe.

Tamales without a Mixer

If you don’t have either a handheld or stand mixer you can still make masa for tamales.

You can use a wooden spoon or really getting in there with your hands is the best option.

The process is exactly the same. Use your hands to whip the shortening then begin adding the other ingredients slowly until you have a well combined masa.

It’s going to take more elbow grease on your part, but you can absolutely do it!

How Do You Make Masa For Tamales 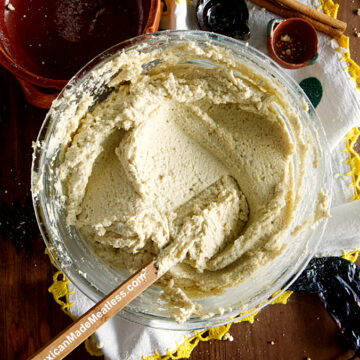 Masa for Tamales without Lard

Nancy Lopez & MexicanMadeMeatless.com
This is my go-to masa for tamales recipe. It doesn’t use lard! It will yield about 3lbs of masa, and should make 25 to 30 tamales using corn husks. The amount will depend on the size of the corn husk as well as how much masa is spread over it.
5 from 1 vote
Save Recipe Saved!
Print Recipe
Prep Time 20 mins
Course main, Main Course, Main Dish
Cuisine Mexican, vegan mexican
Servings 25 servings
Calories 145 kcal

To Make with Handheld or Stand Mixer

To Mix by Hand

*Important Note: Add the broth slowly, the humidity in your kitchen, altitude, and weather conditions of where you live will determine how much liquid you’ll need. I’ve lived in places where 3 ½ cups broth was enough, and another where 5 cups was needed.

If you are looking for the most delicious vegan and vegetarian tamales recipes make sure to grab a copy of my tamales cookbook!