I love tasting new fruits, don’t you? Here in Mexico we have many of the same classic fruits available all over the World, but we also have some uniquely regional gems. You may remember some of those special fruits from a previous article I wrote titled “Mexican Exotic and Tropical Fruits“, well today I’d like to share a few more fruits with you that are quite interesting.

On the platter pictured above there is a mango, and to the mango’s top-right side are some rambutan, below and to the right of the mango are some lychee. Directly across from the mango are little green balls which are called huaya.

Three out of the four fruits on the platter are actually native to Asia, it is only the huaya (or guayas) that is native to Southern Mexico and other parts of Central America and the Caribbean. Mangos, rambutan, and lychee were brought to this area of the world by the Spanish during colonial times when ships would come and go between the Americas and Asia. The Spanish found that the similar climate in the New World meant that these three fruits, and many other foods, could also be grown here and so eventually the fruits became part of the local diet in these areas of the Americas.

I don’t know about you, but I had no idea (until I moved to Southern Mexico) that these exotic fruits were grown here and that they have been a part of the people’s diets for centuries. 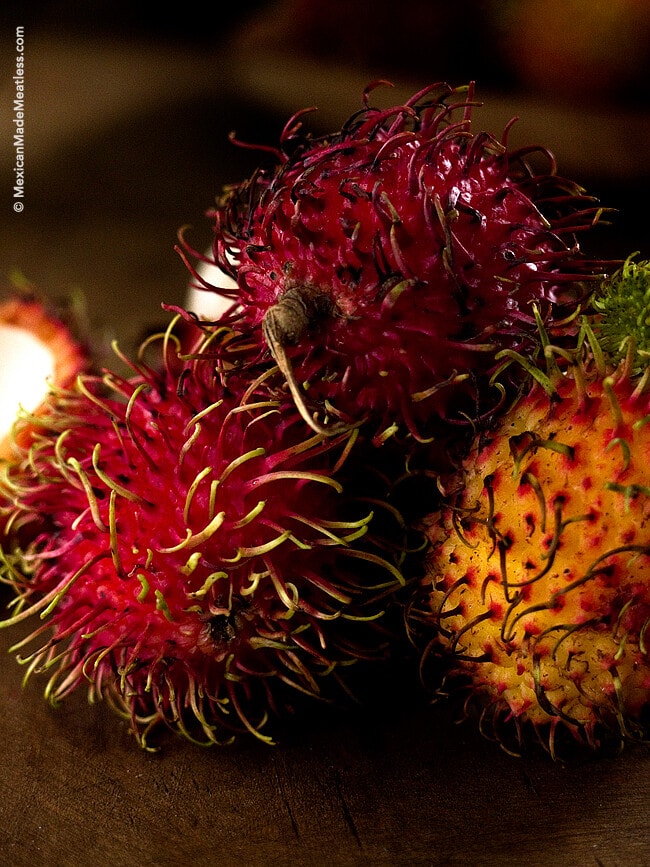 These little red fruits, which appear to have little tentacles, are rambutan. They are either magenta-reddish in colour or can also have a yellowish hue. To peel them you simply insert your nail or a knife to pierce the thick and flexible skin and carefully peel it back and away. The edible fruit inside is little shiny, smooth flesh that has a sweet scent. You bite into it and in the centre it has a somewhat rough skinned seed that isn’t eaten. Rambutan tastes very similar to lychee, in other words it has a sweetness with some floral touches. The fruit’s texture is like a firm grape but not quite as juicy.

In the Mexican areas where rambutan is eaten, it’s either just enjoyed fresh or turned into an agua fresca drink. 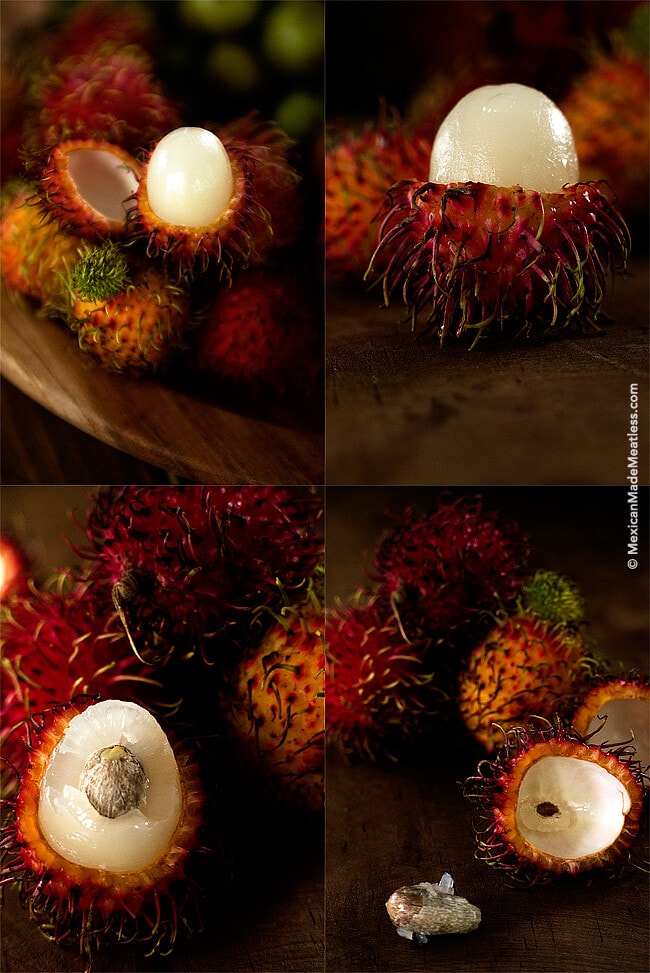 Chances are most of you are already familiar with lychee (pictured below). They actually related to rambutan and quite similar to the Mexican huaya fruit. 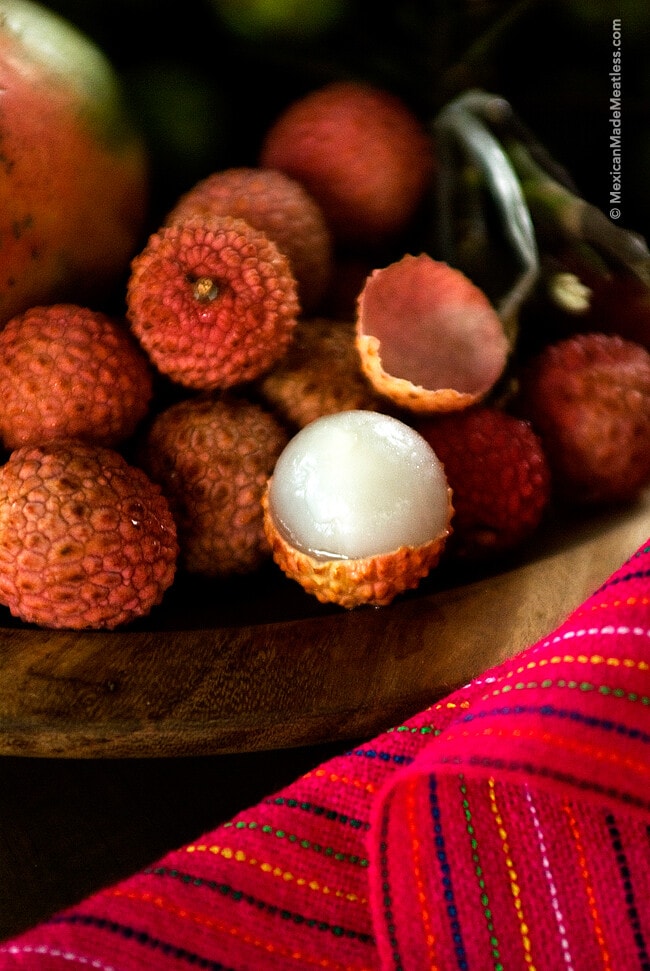 Lychee are native to Asia, or China to be more specific. They have a somewhat thin pink skin that is bumpy but very easy to peel away. Just like a rambutan, you can either use your (clean) fingernail or a knife to make an incision and remove the skin. Again the same white squishy, shiny and smooth centre is revealed. The flavour is very sweet and of course there are those floral scents and tastes. The seed of lychee is different than the rambutan, this one is a dark brown and very hard and completely smooth. 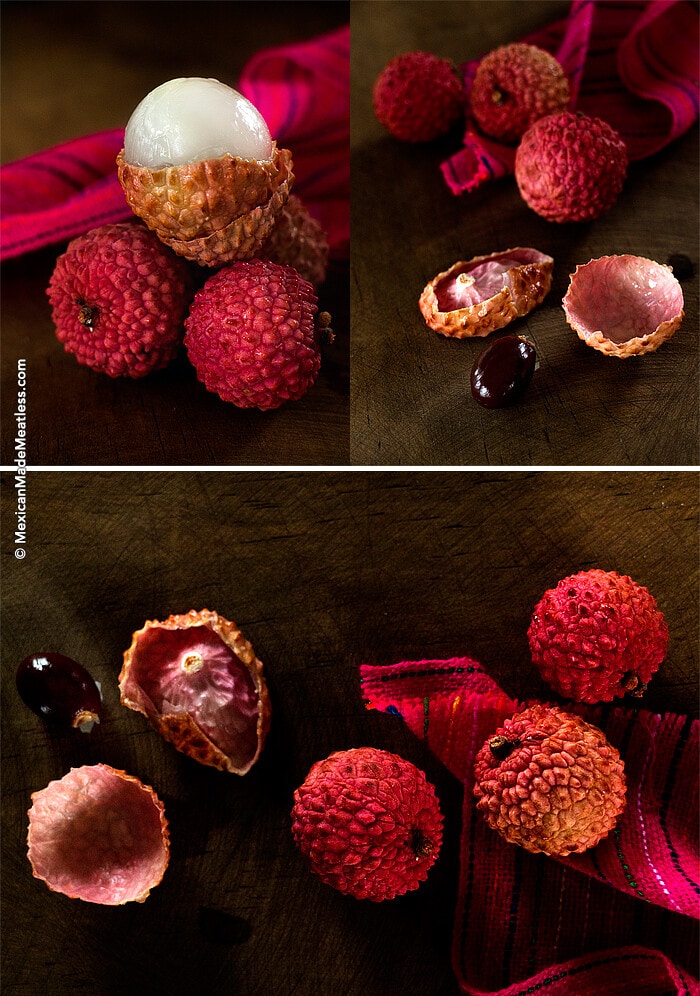 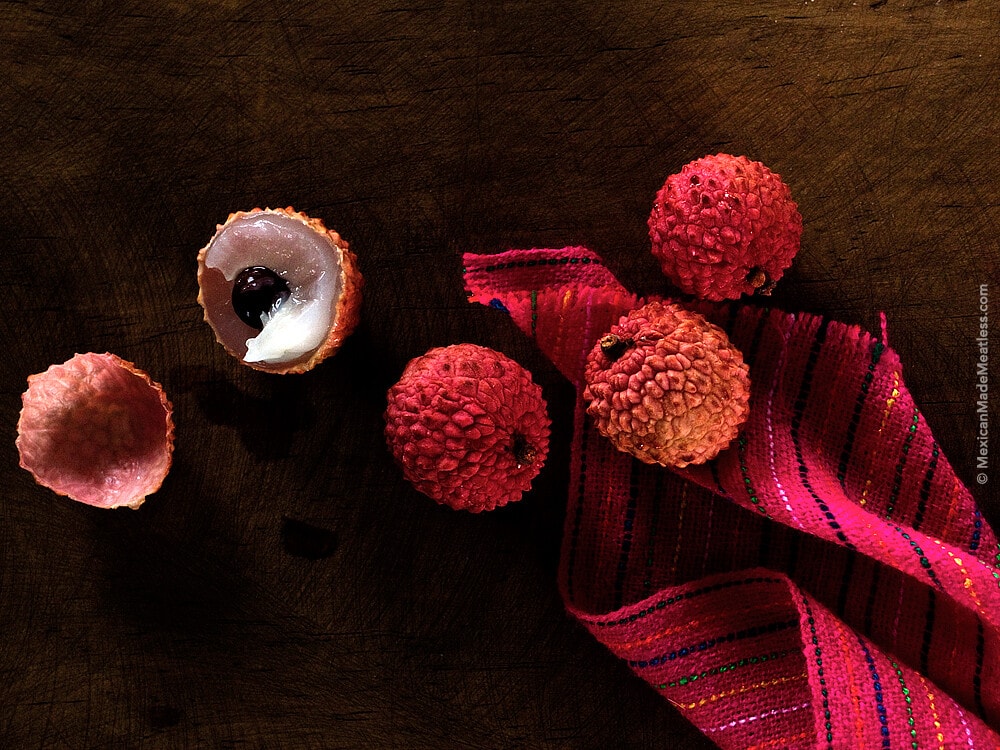 Here in Mexico on the rare chances that you find fresh lychee it’s best to either just peel and pop into your mouth, or some people also like to make agua frescas with them. I prefer to just eaten them fresh to really enjoy their flavour without any other distracting ones. 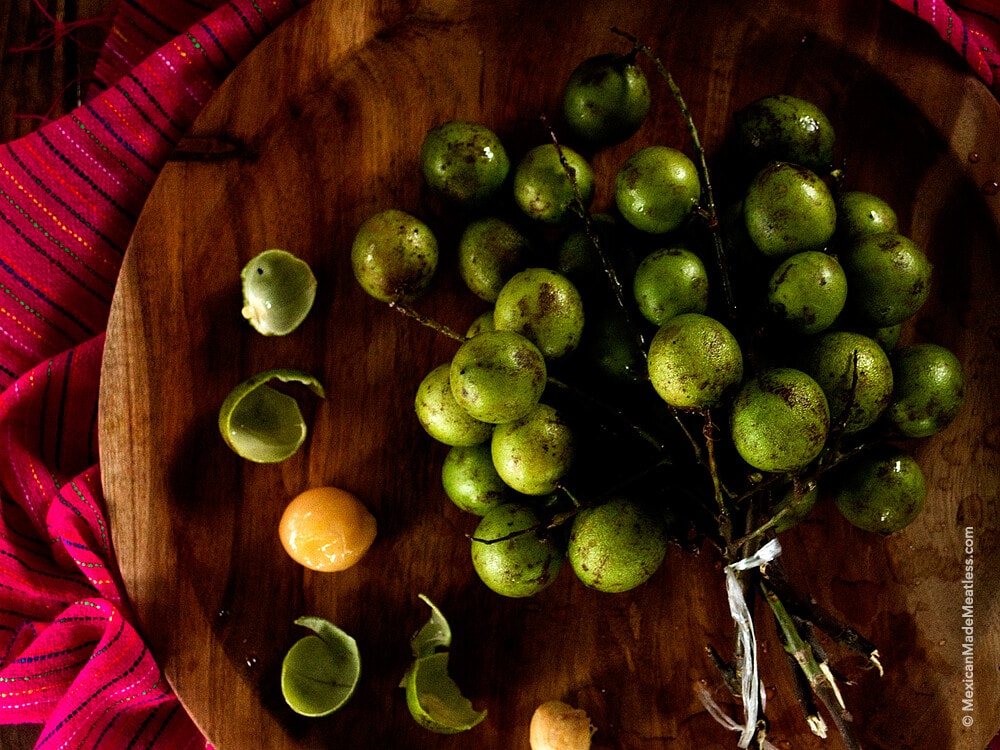 These little green balls are huayas. They are native to the Yucatan Peninsula and are very similar to both rambutan and lychee. Unlike it’s Asian buddies, huayas, are only available in this area of the World. So unfortunately if you want to taste them fresh you’ll have to make a summertime trip to the Yucatan Peninsula. It is typically sold only by small vendors and tied into small bunches in order to sell.

Huayas have a tough outer skin but it too is easy to make an incision and peel away to revel the fruit inside. Unlike rambutan and lychee, the huaya fruit is juicier and softer in texture. Additionally when you pop one in your mouth it is more of a roll it around your tongue and teeth to carefully scrap away the juicy fruit. The flavour of huaya is more tart than sweet and when you’ve eaten the fruit a firm white seed is revealed. The locals say that the seed is edible and they roast them before eating. Some of the local people like to sprinkle the peeled huaya with a little bit of chile powder and some lime juice, since it is tart I prefer to omit that and just enjoy the fruit alone. 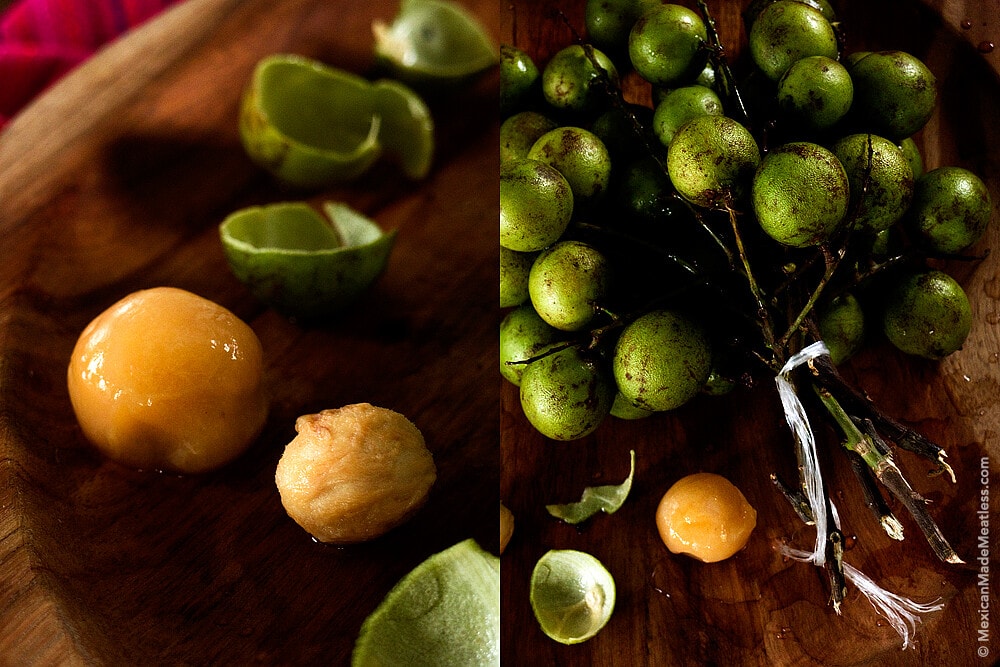 I hope you enjoyed learning about these beautiful summer fruits of Southern Mexico. Perhaps you’ll be lucky enough to make a trip here when they are in season and get to eat them all.

I love sharing new fruit discoveries with you and of course there is the added bonus of getting to eat all this deliciousness. But perhaps what I enjoy the most is that I get to purchase exotic fruits like these directly from the small vendors that bring them in from a relatives farm in the region. This means that we help support small farmers and all in hopes that they continue to produce these gems. You’ll rarely, if ever, find fruits like these in the big supermarkets in Mexico; you must instead seek out the city’s or town’s mercado municipal or municipal market. Additionally if you are holidaying in Mexico also keep an eye out for the small vendors peddling their local goods — trust me these fruits taste much better than the ones produced by the large farm corporations.

I’ll be back with a new recipe soon, but until then, happy eating and happy cooking! 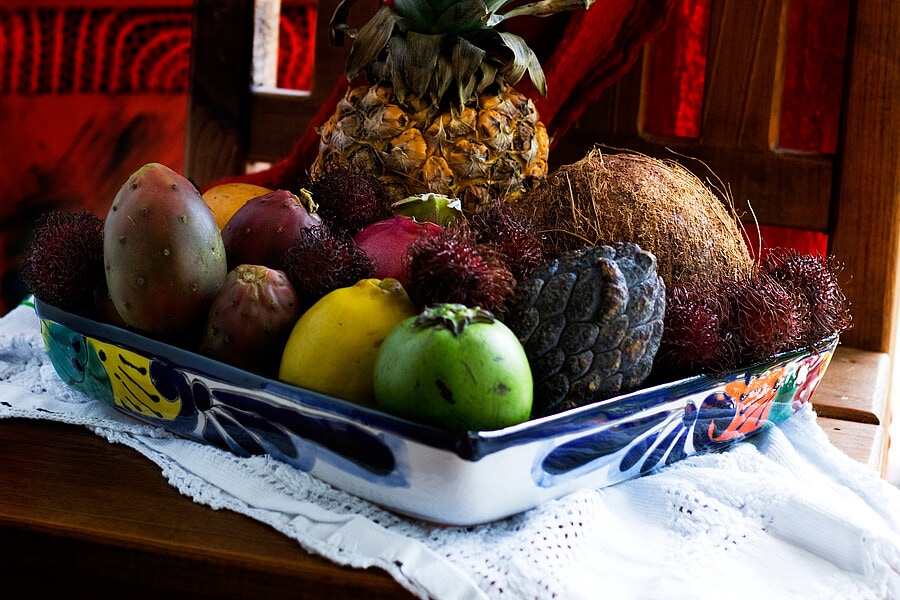 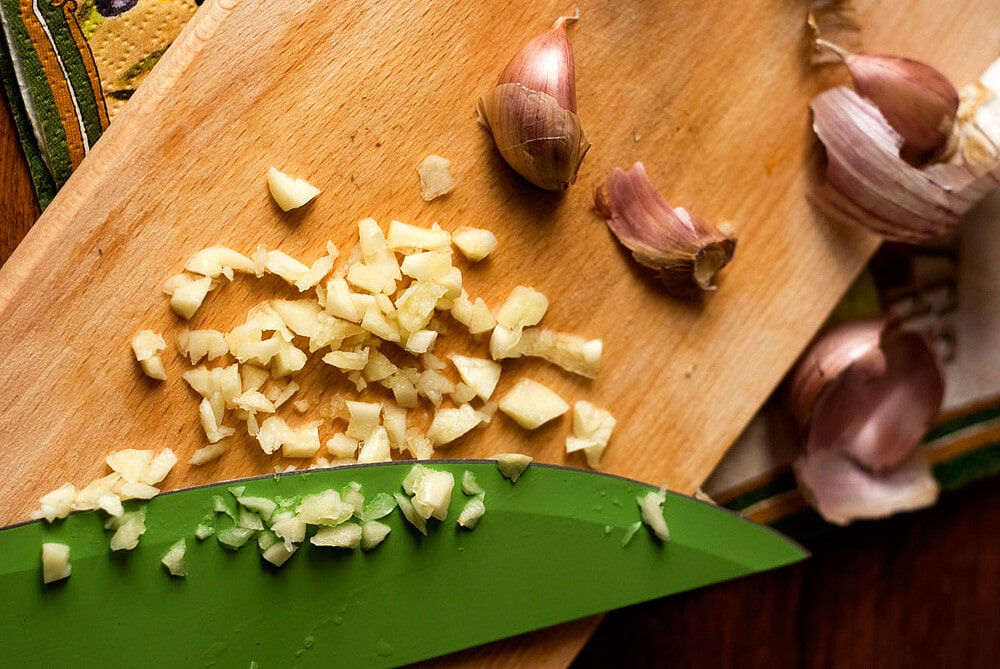 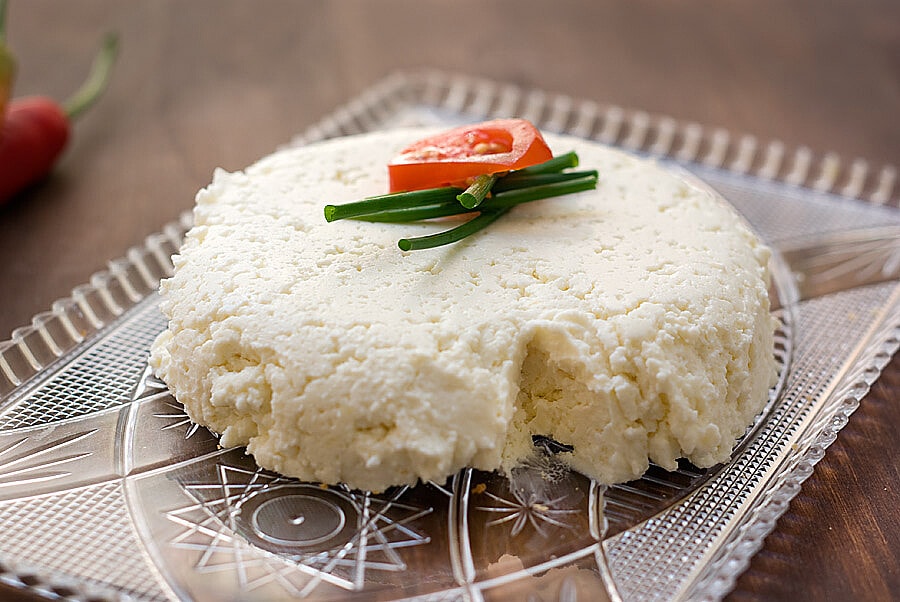 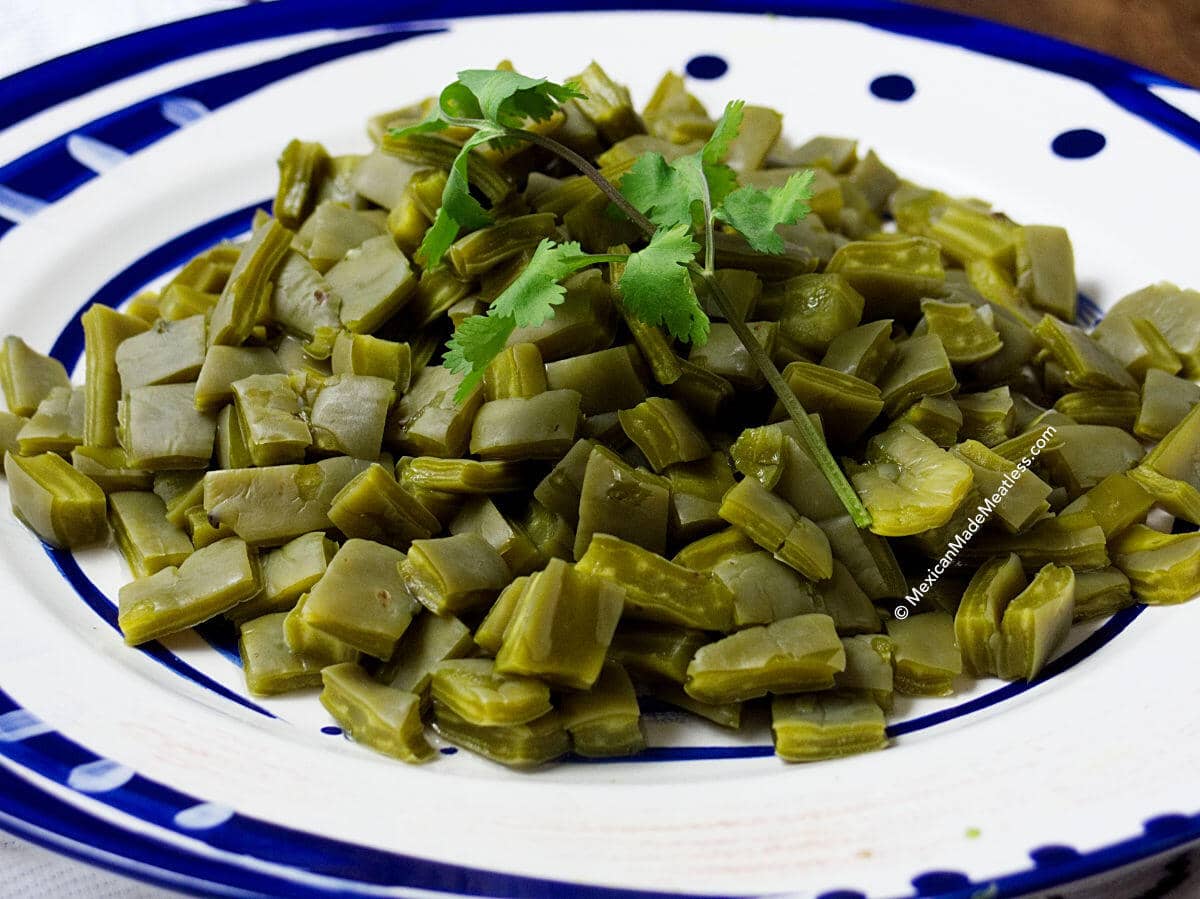