When we lived in Europe there was so many Mexican foods that we painfully missed. Though I successfully created many substitutes, there were simply some things that just couldn’t be substituted. Poblano peppers fit into both of these categories. You can try your hardest using other peppers but nothing tastes like a plump, glistening, forrest green coloured poblano — really, nothing.

Poblano peppers are traditionally used in Mexican cuisine for chiles rellenos (stuffed peppers) or for rajas poblanas, which are strips of the poblano with onion and a creme. (Recipes coming soon) Both of these dishes are amazing and among my favourite Mexican meals, but that’s not the only thing you can cook with poblanos. I’m kinda of making it a personal mission to create as many recipes as possible with poblano peppers. (lol) Today I want to share one of those recipes, these delicious tacos.

You can purchase fresh poblano peppers in many regular grocery stores, if not make sure to check out farmer’s markets and/or Latin food stores near you. If you have the unfortunate luck of not finding the peppers you can use your favourite local pepper variety for a different and unique take on my recipe.

It is important that you not skip the charring of the peppers, this step is what helps really bring out the true delicious flavour of poblano peppers. I char mine over an open gas flame (like in the photos) but it can also be done on a grill, griddle, pan or in the oven over the broiler setting. You choose the method most convenient to you. 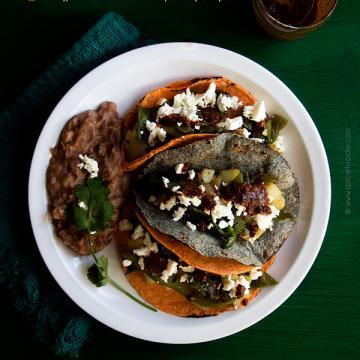 •It is important that you not skip the charring of the peppers, this step is what helps really bring out the true delicious flavour of poblano peppers. •To give the taco meal an extra boost of protein I served them alongside refried beans. Get my recipe here. •The corn tortillas I used were blue corn and ones flavoured with chipotle peppers. Feel free to use regular corn or flour tortillas.
Tried this recipe?Mention @MexicanMadeMeatless or tag #mexicamademeatless!